Make the leap to life abroad

Work with us to embark on your exciting journey abroad!

Are you thinking about moving abroad but unsure how to do it?

That’s exactly the situation our founder David was in only a few years ago. Let him walk you through how he left the United States behind and started his international career in Asia and Europe!

I was born in and grew up in the United States and did not have the opportunity to live abroad when I was young. However, my parents moved the family to different states around the country many times throughout my childhood, and in the process, I became very comfortable leaving everything that I knew behind for an exciting new city. Those moving experiences taught me that there are many interesting and fun experiences waiting just outside my comfort zone.

The most pivotal move that my family made during my childhood occurred when we moved from a small town in Alabama to the vast metropolis of Los Angeles, California. Comparing Los Angeles’ expansive highways to the narrow roads that I left behind showed me that there was certainly much more to see and experience within the United States, not to mention the rest of the world! It was around that time that I also developed a deep interest in Japan and started studying the Japanese language. I finally made my first trip to Japan in high school on a one-month travel and exchange program, and it was everything I had hoped for and much more!

As a result of these experiences, I became motivated to travel to and eventually live in many countries around the world throughout my life, with Japan being the first on my list. While I was not sure how I was going to make this dream a reality or how long it would take to come to fruition, I was committed to seeing it through.

As a first step toward that goal, I decided to major both in business with a concentration in finance and Japanese while in university to see if I could eventually build a career in Japan. I had also hoped to study abroad in Japan while in university, but there were no programs my school had there that offered the classes I needed to take to graduate on time.

Therefore, I decided to spend a semester at the National University of Singapore instead, and that ended up being one of the very best decisions I made as a student. I spent those four months traveling across Southeast Asia and meeting people from around the world. Though I still held a desire to live in Japan, my study abroad experience showed me that I could flourish in various countries around the world, not only in the one that I had been focusing on for so long. I returned to the United States reenergized to move my future career overseas.

Unfortunately, I was not able to find a full-time position abroad upon graduating from university, so I began my career as a financial analyst at an investment bank in North Carolina. I quickly discovered that finance, and North Carolina, were not places where I wanted to spend the rest of my career, and so two years later I took the opportunity to move to San Francisco, California within the same company. Four months after that, I managed to find a product manager position at a mobile free-to-play gaming company and finally left the finance world for good.

Eight months after joining the new gaming company, all of the product managers were offered the chance to work for a three-month period in either the Vancouver or Beijing offices. I volunteered to take them up on it and was sent to Beijing. I did not know what to expect but had an amazing time in the end. The experience immediately reignited my drive to live and work abroad. When I was asked if I wanted to come back again, I requested to be sent back for at least another year – I wasn’t going to let the opportunity to work abroad full-time pass me by!

However, life has a way of throwing you a few curveballs. One month after returning to the United States, the Friday morning after I had been told that we were all heading back to China in two months, I was laid off without warning or reason. Thirty minutes later, I was sitting on the curb outside the office building with a cardboard box of my desk ornaments while my visions of the next year of my life spent in China faded away.

Despite the very real setback, I decided that I would not let my previous employer determine whether or not I would work abroad. A few weeks later, I took the unemployment as an opportunity to travel and left for a two-month backpacking trip around Europe. I used the travel time as a chance to search for positions outside of the United States, and I focused my efforts on China, where I had just accumulated some work experience, and Japan, my ultimate dream destination. Long story short, I had my final interview for a job in Japan on the last day of my Europe trip, and two months later I boarded the plane with a one-way ticket to Tokyo!

I had made a huge step forward in achieving my dreams, and I was pinching myself in disbelief at my accomplishment in the first months in Tokyo. I was enjoying all the fun experiences that came with living in Japan such as traveling around Asia and soaking in the local culture first-hand. Working in Japan was challenging but certainly worth the effort to be able to take advantage of such a great opportunity.

Unfortunately, all good things come to an end. My position at my company in Japan became less secure as the months passed, and I knew that it was time for a change. I could not find a position that fit my search criteria in Tokyo, and so I decided to start applying for jobs in my next intended destination – Berlin. I had visited Berlin for a few days during my Europe trip and left knowing that I needed to spend more time in the future. Lo and behold, I got an offer from the first company I applied to in Berlin, and so I boarded a one-way flight to the German capital a few weeks later for the next chapter in my career!

I had made a huge step forward in achieving my dreams, and I was pinching myself in disbelief at my accomplishment in the first months in Tokyo. I was enjoying all the fun experiences that came with living in Japan such as traveling around Asia and soaking in the local culture first-hand. Working in Japan was challenging but certainly worth the effort to be able to take advantage of such a great opportunity.

Though that first job in Berlin was instrumental in getting me to Germany, it was not what I was looking for, and I left voluntarily after only five months. Unfortunately, the next job did not work out either, and I left again after eight months. It began to feel like it might not work out for me to continue working in Berlin, but I decided to give one more company a try, and luckily in my case, the third time was the charm. I joined another gaming company built by people that had worked for my previous employer in San Francisco – people that I both liked and respected.

One additional benefit of working for this small startup company is that they had a relatively open-minded stance toward remote work. As long as your work got done on time, where you did your work from did not matter. I took my time to gain the trust of my colleagues and learn the ropes before starting to work remotely, but after starting to get a feel for the situation, I started working remotely more and more. Soon I was taking one week per month in another country around Europe to experience the local food, culture, and vibe at night while working during the day.

After 18 months of working at that Berlin-based company, I was laid off once again when investment in the project I was working on was cut. That meant that I had tried working for three companies in three years in Berlin, and so I knew that it was time for me to find my next destination.

I applied to companies across Europe, all the way from Tallinn, Estonia to Copenhagen, Denmark. While I had cast a wide net in my search, I had secretly hoped since the beginning to be able to make it back to Portugal, a country that I loved and could easily see myself living in for many years. After 5 months of searching, the opportunity finally came in the form of a Senior Product Manager position at InterNations GO!, an expat relocation company based outside Porto, Portugal. Not only was the job description exactly aligned with what I was looking for, but the office was also located only 10 minutes walking from the beach!

Step 7 to Freedom: Working for Myself

After working at InterNations GO! and learning about the expat relocation industry from the inside, I began to see that there were many people around the world wanting to move to a new country but unsure where to start. Rather than just trying to sell services to people at the time of their move, I believed it would be better to start building relationships with people interested in moving abroad from their very first planning steps until they were settled in their new homes abroad.

Every time I raised these ideas within the company, my input was ignored, so I knew that I needed to go out on my own. I had been working on Expat Empire on the side for more than two years at that point and was already getting consulting clients and traction with the content on the website, so it was the perfect time for me to start working on Expat Empire full-time so that I could help as many people as possible to achieve their international dreams.

Imagine, plan, and achieve the international lifestyle you desire

Whether you want to move abroad for the first time, find your next country to live in, or travel and work across the world, we have the knowledge and experience to help you make it a reality

Here’s how we can support you in creating the international lifestyle of your dreams!

Find the best places around the world that match your preferences

Get your personalized roadmap to taking your career remote

Connect with Our Partners

Get support from immigration lawyers, tax accountants, and more

See what our clients are saying

Why should you work with us?

Take the next step in your journey

Interested in seeing how we can help you achieve your goals? Send us a message to set up our first meeting! 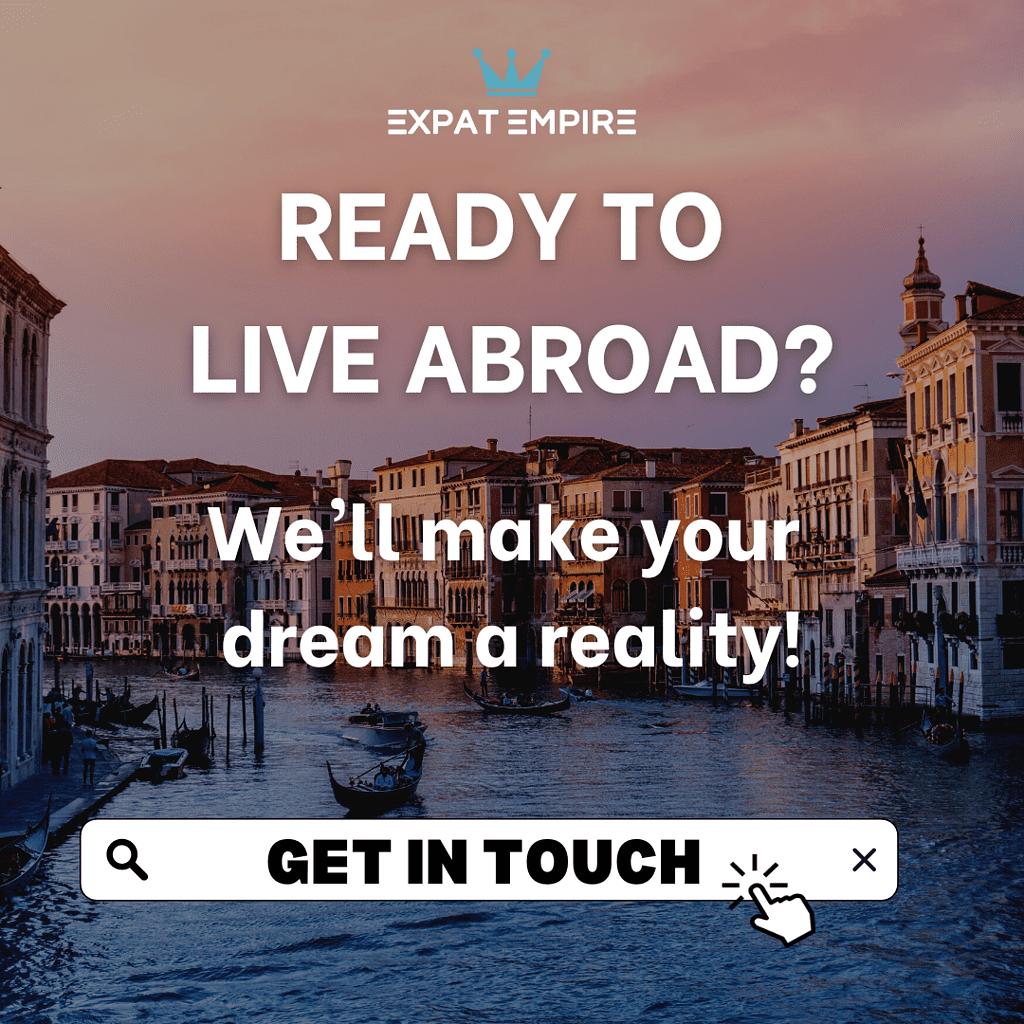